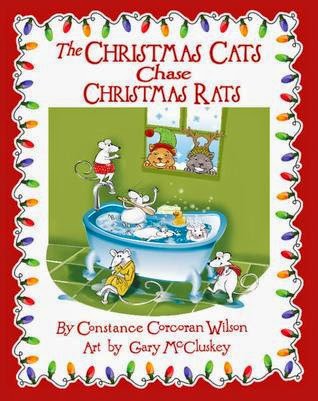 About the Book
The second book in the Christmas Cats adventure, the lesson to be learned is: In life, always keep an open mind. Don't accept stereotypes as true or let the unfounded opinions of others prevent you from finding out the truth for yourself. We all need to act without prejudice and learn to accept each other as individuals.

The Christmas Cats learn that rats, too, should be judged as individuals. Another message: all of us should try to help others.

My Take
When my daughter first saw this book, she wanted to read it. I will admit, the cover art really drew us in. It has bright colors and rats in a tub looking like they are having fun. Obviously, this was going to be a good book. Inside the book the artwork is just the same. It is very colorful and whimsical. The artist has "cartoon" life mixed with some everyday life. I like this because it helps kids identify with the story better. Not only do they see it as a cartoon, but they seem some reality in it.

The writing style Mrs. Wilson decided to take, is rhyming. This I think helps kids enjoy the story because they get a rhythm going with the story and it is easy to read the book. The words are printed in a larger format than you would see most stories and they alternate between red and green. Of course it would, it's a Christmas book!

Like I stated before, my daughter liked this book. I also liked it too. I think it is one that should be included on children bookshelves. Especially around Christmas time.

About the Author
Connie graduated from the University of Iowa with a degree in English and Journalism, but she began writing for her hometown (Independence, Iowa) newspaper at the age of 10 and was Editor-in-Chief of her high school newspaper. She continued her education, including a Ferner/Hearst Journalism Scholarship and a Freshman Merit Scholarship at Iowa, and then at Berkeley, WIU, NIU and the University of Chicago. Connie holds a Masters (+30) in English, Journalism and Education. Her career path led to teaching 7th and 8th grade language arts (Silvis, Illinois) and teaching writing at 6 IA/IL colleges or universities, including a class teaching film at Black Hawk Junior College. She then established the second Sylvan Learning Center in the state of Iowa and a Prometric Testing site, in conjunction with ETS of Princeton, NJ. She has taught writing and literature classes at all 6 IA/IL Quad City colleges.

Connie lives in East Moline, Illinois with husband Craig and in Chicago, Illinois, where her son, Scott and daughter-in-law Jessica and their newborn twins Elise and Ava reside. Her daughter, Stacey, a graduate of Belmont University in Nashville, Tennessee, has been living and working in Australia since February of 2012.
Posted by Unknown at 4:09 PM