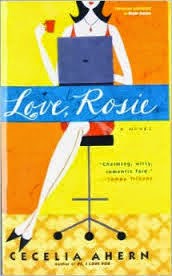 
About the Book
What happens when two people who are meant to be together can't seem to get it right?

Rosie and Alex are destined for each other, and everyone seems to know it but them. Best friends since childhood, they are separated as teenagers when Alex and his family relocate from Dublin to Boston.

Like two ships always passing in the night, Rosie and Alex stay friends, and though years pass, the two remain firmly attached via emails and letters. Heartbroken, they learn to live without each other. But destiny is a funny thing, and in this novel o f several missed opportunities, Rosie and Alex learn that fate isn't quite done with them yet.


My Take
Love, Rosie (the American title for Where the Rainbow Ends and Rosie Dunne), is hands down one of the best books I have read this year. I wasn't sure if I was going to like it because the story is in the form of emails, text messages, and letters. Surprisingly, it didn't hinder me finishing the book. I pretty much didn't stop reading until I was done. I heard a lot of people say they either hated it or loved it. I was on the loving it side. Just within the first few chapters, I was laughing or grinning over some of the correspondences. The author did a great job when writing this story. She was able to keep you wondering what was going to happen next, even though it wasn't in a typical style of paragraph to paragraph.

The story is about two kids, a boy and a girl, who become best friends at a young age. We get to follow them from grade school, high school, college and adulthood. We get to experience all of their tragedies and triumphs. I feel as though the story centers around Rosie and her connections with everyone in her life.

Now, regarding the film.

Which did I like better, the book or the film? I preferred the book so much better. I know the film has been in the cinemas already, but I don't go. I wait for them to come to DVD and them rent them. I thought the movie did the book a really big injustice. It put characters together that weren't even in that capacity. It also had the two main characters engage in situations way before they did in the book. It was just a jumble of mess. At least that is how I felt. I thought, if they followed the story from the book to the tee, it would have been great. I felt as though they were trying to fit everything in and it was jammed packed and rushed.

Cecelia Ahern is the author of the international bestsellers PS, I Love You; Love, Rosie; If You Could See Me Now; There's No Place Like Here; and The Gift. The daughter of Ireland's former prime minister, she lives in Dublin.