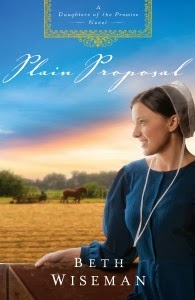 
This story, Plain Proposal, is about a young Amish girl who is going through some changes in her life to see where she really truly wants to be. Miriam is on her rumschpringe and is really enjoying it. The one thing she hasn't done is left her small little community. She loves it there and doesn't plan on leaving. One thing she does know for sure is that her heart belongs to a young Amish boy named, Saul. She has liked Saul for many many years. Even though he is shy and hardly ever speaks to her, she knows that he is the one for her. He is also known as the community "bad boy", but she doesn't let that faze her. Nor does she believe all the rumors going around about him saying he is not going to be baptized and will be leaving the community.


Saul has issues of his own that Miriam doesn't know about. He happens to care for her also, but tries to veer from her so that leaving will be easier for him. On top of that, his father has become an alcoholic, since his sister and mother were killed. He also is caught up with having to help or practically raise his two younger brothers. The one silver lining for him is that he has been offered a job in another city as an apprentice chef. Cooking is something he enjoys a lot and that job would be a dream come true.

Shelby is Miriam's cousin and is an English person (someone who isn't Amish) and has been sent to stay with Miriam and her family for a while. Shelby's parent's divorce has been hard on her and the fact that her boyfriend broke up with her left her getting into all sorts of trouble. What better place for one to go and stay and get one's life situated, an Amish community. At first she doesn't seem to like it much, but then realizes that there is a family unity that they have that she has been missing with hers. She also starts to enjoy the company of one of Saul's friends. Unfortunately, Shelby gets blamed by Miriam's mother for her daughter's new behavior. And for a slight minute, she thinks that maybe this place isn't for her.

Once Miriam and Saul realize that they do honestly care for each other and nothing can or will stand in their way. They do whatever possible to make it happen. Of course, once their parents are on board, they also help them out.

I really enjoyed reading Plain Proposal. Beth Wiseman does a really good job of writing and getting the reader involved in the story. At the beginning of the book, she has a list of Amish words and their English meanings and at the end of the book are a couple of Amish recipes. One could really immerse themselves in the Amish culture while reading the story. If you love Amish stories, I recommend this one for your bookshelf.

This book was given to me for my honest review.