Mickey and the Plow Horse, by Edward Dreyfus PhD

Title: Mickey and the Plow Horse


About the Book
Mickey Brandfield is a 12 year old self-proclaimed nerd who spends his time alone with his iPad, his iPod, and his countless video games. His ongoing struggle with asthma renders him unable to participate in the rough and tumble activities kids his age enjoy, including sports, but that doesn't stop his parents from packing him off to camp for the summer. There he meets Jackson, a lonely and beaten down plow horse that seems to need Mickey's friendship as much as Mickey needs his. The moment Mickey touches Jackson,something magical happens: he discovers that he and the plow horse share a gift that will change their lives forever.

My Take
I was lucky enough to ascertain a copy of the book Mickey and the Plow Horse. When I first received the book, I wasn't sure how great it was going to be. Whatever doubt I had was gone the minute I started to read the book. The author had me reeled in on the very first page. Within the first chapter alone, I was wondering how it was going to turn out and pretty much didn't put the book down until I was done. Once I had finished the book, I remember turning to my daughter and telling her she had to read the book. I actually started to tell her what the book was about after a couple of pages in and she told me to stop.

The book is set up for readers of all ages. Granted it was written for the younger group. I also really like how the words are spaced on the pages. It isn't jumbled up with small print like most books. I was able to easily see the words and move right through the book. I know this is going to appeal to my daughter as well. His writing is simplistic enough so that the younger readers will not have a hard time understanding the story. His style of writing is so amazing that I was able to visualize everyone and everything around "me" in the story. A good writing will make you feel like you feel like a part  of the story and that is exactly how I felt reading this book.

The characters in this story are all enjoyable. I don't think there was a character that I hated. I do know that you will feel for Mickey and "laugh and cry" with him all the way through the book.

Like I stated before, I really enjoyed reading this story and think everyone should include it in their home or school library. 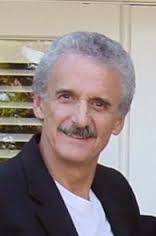 Dr. Edward A. Dreyfus was born and raised in The Bronx in New York City, attended City College of New York, and earned his PhD. in Clinical Psychology from the University of Kansas. He has been a practicing psychologist for the past fifty years in Santa Monica, California where he offers individual psychotherapy, relationship counseling, sex therapy and life coaching. He has been married to his wife Barbara for thirty years, has three grown children and five grandchildren, and a pooch named Charlie. He has published five previous books, and has written several screenplays.

This complimentary book was given to me by the author for my honest review.
Posted by Unknown at 3:43 PM