Fallen: Out of the Sex Industry and Into the Arms of the Savior, by Annie Lobert 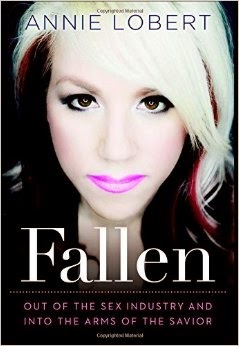 Title: Fallen: Out of the Sex Industry and Into the Arms of the Savior


About the Book
When Annie grabbed at what looked like an opportunity to escape her tumultuous, abuse-filled home, she had never heard the term "sex trafficking.: Needing money, wanting to be loved, and desperately seeking control of her life, she stumbled into the ever-darkening world of the sex industry as a glamorous high class escort in Las Vegas. All that glittered was not gold. She embarked on a dangerous path toward self-destruction. She lost everything she envisioned her new life would bring her, even her own identity. Beatings, abandonment, and death threats became routine-she often wondered if dying would be the best way out.

In Fallen, Annie tells her remarkable story of surviving sixteen years in the sex industry, breaking free, finding healing, and then reaching back to help others find freedom as well. This riveting memoir opens a window into a sordid, shadowy world - and shows just how bright God's light can truly shine.

My Take
I know a lot of us think our life is really hard. We think every day that life could be easier or we would want it to be easier. But there are people out there that have actually had hard lives compared to some of us. I know a lot of times I think my life is hard (being a single mom, working almost full time and homeschooling), but I have to tell myself that there are other people out there who are having a harder time with life than I am and would give anything to be in my position than what they are in.

Annie Lobert had a tough life, but like most determined people, she found a way out. Life didn't start out well for her at all. She was sexually abused at a young age and then turned to prostitution or more or less a high class call girl. During her life as a high class call girl, she met a couple of men who didn't treat her the way she should have been and had to enduring beatings and abandonment. On top of that, she developed cancer and became addicted to cocaine.

The only thing that could happen to Annie Lobert was to either die or turn her life around. She decided to rely on God and turn her life around. Relying on him heavily helped her see that there were others that could benefit from her story. She decided to let others know that there is hope by participating in speakings and ministries. And as luck would have it, through it all, she found her prince charming.

Towards the end of the book, there is a section on sex trafficking. It gives you a deeper understanding of what it is and how it is done. There is also a section of testimonies from girls who have attended the Destiny House Ministry. You will be amazed at some of these stories that you read.

I have read a couple of "sex trafficking" stories, but this one was different. It was written in a way that you could truly feel for Annie Lobert. I practically read the book in one sitting. I think if you were to get this book, you would enjoy it and realize that no matter where your life is and how hard it may be/feel, that God can pull you through and push you to the top, just like he did for Annie Lobert.

About the Author
Annie Lobert is an internationally recognized expert and advocate of ministry to men and women in the commercial sex industry. She and her husband, Stryper lead guitarist Oz Fox, live in Las Vegas, where Annie runs Hookers for Jesus, a ministry to prostitutes and sex trafficking victims. She has been featured in major television shows, print and online publications, and also an I Am Second film.
Posted by Unknown at 11:31 AM

Email ThisBlogThis!Share to TwitterShare to FacebookShare to Pinterest
Labels: Annie Lobert, book review, book tour, Christian Life, Fallen, memoir, Out of the Sex Industry and Into the Arms of the Savior, religion, Social issues