What The Heart Sees, by Kathleen Fuller 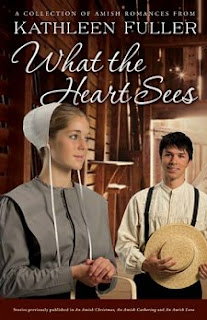 I am a really big Kathleen Fuller fan. So when I was given the chance to review her book What the Heart Sees, I was truly thrilled. Not only do I get to read one story written by her, but also I get to read three all in one book. In this book, she has put a collection of Amish romance stories together.
The first story, A Miracle for Miriam, is about a girl who is young and in love and then has it all taken away from her. That is what happens to Miriam. As a child she has a crush on Seth who one day humiliates her and causes her to harden her heart when it comes to men. As time goes by, Seth moves away and spends time with some English friends. While there, he gets involved in an accident, which causes him to change mentally and physically. When Miriam sees him years later, she notices the changes. But is it good enough for her to let go of the past and move forward with him?
The second story, A Place of His Own, is about two good friends and on tragic moment. Josiah moves away without saying good-bye to Amanda. Years later, he returns to the community a different person. Amanda wonders what has happened to her friend from years ago. Why is he so bitter? Then a barn fire erupts and the community comes together, which has Josiah come to a realization about them.
The third and final story, What the Heart Sees, is about a man name Christopher who is angry from the accident that left him all alone and without a fiance. And after a downward spiral, he enters into a five-year bann. Later he decides to go home where he is reunited with Ellie, who was left blind from an accident of her own. Can they let go of the pains from the past and move forward into the future?
The book also has a couple of Amish recipes in the back that you can try. Can I say Cream Cheese Brownies?
What the Heart Sees is a really great book and if you love Amish books, you will really love this one. Kathleen Fuller is a really great writer and I think everyone should read it.
I thank Thomas Nelson for the opportunity to read and review this book.
Posted by Unknown at 5:00 AM

Email ThisBlogThis!Share to TwitterShare to FacebookShare to Pinterest
Labels: A Miracle for Miriam, A Place of His Own, Amish, book review, Christian, Fiction, Kathleen Fuller, Romance, What the Heart Sees