If You Were Me And Lived In...Australia by Carole P. Roman 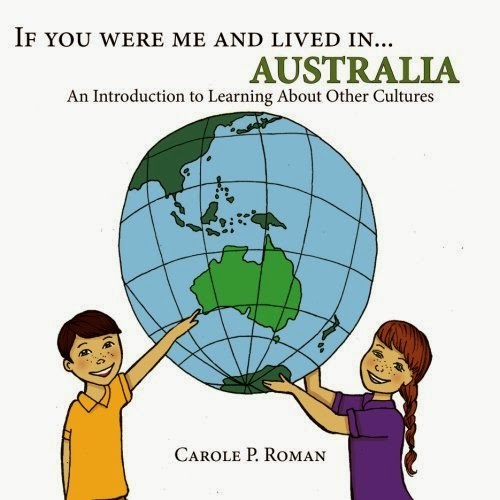 Series: If You Were Me And Lived In...

About the book: The latest in Carole P. Roman's delightful, globetrotting series, this colorful immersion down under opens a child's world up to the many strange and wonderful things that take place in other countries. Written in simple, playful language especially for young readers, this latest addition to the series is certain to inspire curiosity and launch children on a lifelong love of exploring other locales.

About the author: Former teacher Carole P. Roman is an accomplished author of the critically acclaimed Captain No Beard series that deals with issues as dyslexia, compromise, sharing and leadership. The first book in the series was named to both Kirkus Reviews' Best of 2012, as well as the Pinnacle Award-Best Children's Book 2013. The first book in her next series, If You Were Me And Lived In...Mexico, received the Pinnacle Award for Best In Non Fiction 2012.

My Take: If You Were Me And Lived In...Australia, the next book in the series is a really great book to have if you want to learn about Australia.

The book starts out by giving you a background history on Australia. Like where the name comes from, where it is located and the capital. It also shows you some of the popular buildings and where they are located. For example, the famous Opera House and the Great Barrier Reef. We find out some of the most popular names for girls and boys that are used in Australia. You also learn some of the foods they eat, one of their famous holidays, a sport that is played, the name of the school you would attend and what you call your mother and father.

Another great thing about this book is that the key words have pronunciations behind them so that you will be able to say the word and understand what you are reading and a glossary in the back. The pictures are done in a way that will draw children to the book and keep them reading. It is very colorful.

My daughter really liked this book. I know she learned from it because the next day she was waiving an Australian flag in the air and told me all about the celebration they have.

I highly recommend this book for anyone who wants to learn about a country other than their own. And suggest while one is at it, they collect the whole series. Some of the other countries are France, South Korea, Turkey and Mexico.

This book was given to me by Carole P. Roman for my honest review.

Email ThisBlogThis!Share to TwitterShare to FacebookShare to Pinterest
Labels: Australia, book review, Carole P. Roman, children's book, If You Were Me And Lived In...Australia, series