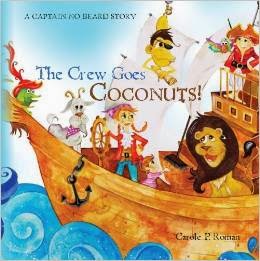 About the Author: Award-winning author Carole P. Roman has produced another book for her "Captain No Beard" lineup. The first book in the series, "captain No Beard: An Imaginary Tale of a Pirate's Life" was named to Kirkus Reviews' Best of 2012, with a Star of Remarkable Merit, and was presented with a National Association of Book Entrepreneurs Pinnacle Award in 2013. Roman, a former teacher, is the mother of four and grandmother to many. She currently resides on Long Island with her husband.

About the book: As the imaginations of cousins Hallie and Alexander bring their stuffed animals to life, the crew of critters is stranded alongside a desert island. The friends wish to refresh their thirst; however, the newcomer to the ship makes a critical error that draws the negative attention of the other shipmates. Miffed by Matty the Goat's mistake, the parched crew turns on the hapless greenhorn with cruel taunts and personal attacks. Captain No Beard steps in and expertly navigates the rough waters of bullying with sensible leadership that leaves everyone with a good taste in their mouths.

My take: I think this is a really cute book. Plus, you can't go wrong when there is a series of them to read. I think the way the author teaches kids it is not okay to judge is incredible. She keeps her writing very simplistic, so that even a younger child could read it for themselves. Some of the names like, Mongo the Monkey and Linus the lion, I think helps to keep young ones interested. She uses dialogue that most younger kids would use when speaking about someone they do not like.

The artistry for the book is also great. The characters and colors that are used I feel really appeal to children. The way they are drawn grabbed my daughter's attention and made her want to read the book. The expressions on the character's faces really make you feel for them.

I think this is a really cute book that everyone should have their children read. It could really help them understand how to deal with bully issues. The story shows how it starts, what happens and the outcome to make it all work out.

This book was given to me by Bostick Communications for my honest review.
Posted by Unknown at 3:38 PM