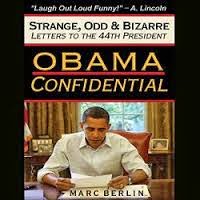 About the Audiobook
From celebrities as diverse as Warren Buffet, Bill Clinton, and Steven Spielberg, to anonymous everyday citizens like the minimum-wage waitress in Oklahoma and a dry cleaner named Al Kayda in Wisconsin,Obama hears it, and gets it, from everyone. And when you're the president, absolutely no subject is off-limits. An ex-student in Illinois is drowning in an ocean of debt; a harried housewife in Wyoming has dubious ideas about how to save hard-earned pennies; while a gun owner in Tennessee vigorously defends his right to bear arms. Obama, who's obviously a very busy man, sometimes answers with a brief innocuous letter of his own. Echoing another classic of U.S. history, Alex de Tocqueville's ; Democracy in America;, 'Obama Confidential' offers a vivid, consistently amusing snapshot of America in the second decade of the 21st century, with hilarious results.

My Take
This review is way overdue and I feel bad about that, but in my defense, I have this audiobook in my car and listen to it all the time. I love it and it keeps me laughing. The different letters that are "written" to the president are hilarious. They are very appropriate for the areas that they "come from". What makes it even better are the different voices that you hear along with each letter. To be perfectly honest, there were times when I forgot that it really wasn't the president or they were made up people. The narrator is very good at changing his voice and mimicking other people.

There are three different discs. All together it is about 3 hours long. This makes it perfect for when you are on a trip and you need to pass time. There are pictures of the president and his wife on the discs. It gives you more of a feeling that he is the voice that is answering the letters. The box set is nice and small and can fit in your glove box.

I don't tend to listen to a lot of audiobooks, but am glad that I had the chance to review this one. Like I stated before, I haven't laughed this hard in a long time. Granted, some of them are straight up political, but a lot of them won't be heard as super serious because of the different voices and storyline for all the letters.


Berlin is the author of three books of humor, That Cloud Looks Like Jesus, The Skeptic’s Handbook and Obama Confidential.


He grew up in Marblehead, Massachusetts and attended The University of Pennsylvania. After graduating from the University of Pennsylvania he went to film school at Columbia in New York City for a year. He says he learned zero, so he went out to Los Angeles and became a script analyst. Among other things, his background includes comedy writing for Joan Rivers and being a script analyst for Jack Nicholson.

He and his wife, Heidi, live in Plymouth, Massachusetts. They have no pets.

I was given this complimentary audiobook by Bostick Communications and the author for my honest review.