Somewhere to Belong, by Judith Miller 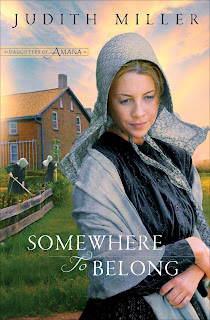 Have you ever lived in one type of “world” and was put into another one? Or lived in one place and chose to visit another? In a sense, that is what happens to the two girls in this story, Somewhere to Belong, by Judith Miller. This is the first book in the Daughters of Amana Series, which is set in the Amana colonies in 1877.
Johanna Ilg, a 24 year old girl, has lived in one of the seven Amana colonies all her life. Much like the Amish community, they dress in solid dark colors, eat in communal settings, and rely heavily on God. Johanna’s older brother has chosen to move away from the colony and live in Chicago. This peaks her interest, but her parents don’t approve of her wanting to visit Chicago. The only form of the outside world that she gets are visitors to the area, until the Schumachers move in.
Berta Schumacher, a 16 year old girl who hails from Chicago, has moved to the Amana colonies with her parents. She is devastated that she has to live in an area where life is pretty much dull compared to what her life was like in Chicago. With her stubborn ways, she wrecks havoc in her new world.
Johanna is chosen to show Berta the ways of the Amana colonies and has a hard time getting the young girl under control. Throughout their up and down times together, they become closer than expected and learn to confide in each other. Little by little secrets start to come out and unexpected situations arise. These are what leave Johanna and Berta to make the biggest choices in their lives.
I highly recommend this book. It was a great read. Judith Miller’s writing makes you dive into the book and has you feeling as though you are right there experiencing everything that the people are going through in the book.
This book was given to me by Bethany House in exchange for an honest review.
Posted by Unknown at 5:15 AM