Daughters of the Dragon, by William Andrews 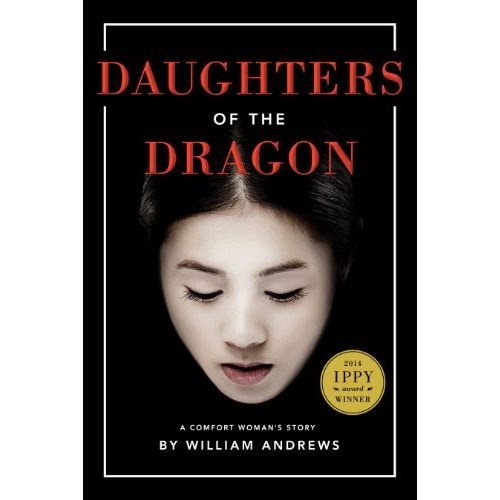 Title: Daughters of the Dragon: A Comfort Woman's Story

About the author:
Bill Andrews has a personal connection to Korea - his only child who arrived from the Land of the Morning Calm as a cheerful, smart four month old. Since then, Bill has been fascinated by Korea.

For over 30 years, Bill was a copywriter and a marketing/brand executive with several Fortune 500 companies. For fifteen of the more painful years, he ran his own advertising agency. At night and on weekends and sometimes during the workday, Bill wrote fiction. Bill's first novel titled The Essential Truth (coming out later in 2014) won first place in the Mayhaven Contest for unpublished fiction.

Today, Bill is retired and focuses on his writing. He lives in Minneapolis with his lovely wife, an inner-city public school teacher for 32 years. And proudly reports that the smart four month old is now an orthopedic surgeon.

About the book:
During World War II, the Japanese forced 200,000 Korean women to be sex slaves for their soldiers. This is one woman's riveting story of strength, courage and promises kept.

Young Ja-hee and her sister are torn form their family farm and forced to become sex slaves, or comfort women, for the Japanese army during World War II. Before they leave home, their mother gives them a magnificent antique comb with ivory inlay of a two-headed dragon, telling them the dragon will protect them. The sisters suffer terribly at the hands of the Japanese and by the end of the war, Ja-hee is forced to flee while her sister lays dying.

Ja-hee keeps her time as a comfort woman a secret while she struggles to rebuild her life in North Korea. she meets a man who shows her what true love is. But the communists take him away in the middle of the night and she is forced to escape to the South. There, she finally finds success as the country rebuilds after the Korean War. But her terrible secret is revealed and she's thrown into poverty. In the depths of her despair, she's tempted to sell the comb that she believes has no magic for her. But one day she discovers its true meaning and her surprising heredity. And now she must find the only person who can help her carry on this legacy... someone she abandoned years ago.

My take:
I have to start out by saying, this has become one of my number one favorite books on my shelf. I didn't really know what a comfort woman was until it came across my mobile in the news section one morning. The article didn't go deep into it, so I just learned about the surface of it.Then the opportunity to review this book presented itself and I couldn't pass it up. I am glad I didn't because this is a story that everyone should read to learn in depth about what actually happened to some of the women in Korea.

When you read Daughters of the Dragon, the author's writing style will totally draw you in. I didn't even feel like I was reading to be perfectly honest. My imagination was able to take off and allow me to feel as though I was on the heart wrenching journey with Ja-hee. I could actually envision not only the main characters, but all the other ones in the story and their surroundings, vividly.  I also really enjoyed how we went from present time with Ja-hee talking to her granddaughter (Anna) and jumping back in time when she was telling her life story.

Most of the time when people do book reviews they do not mention the cover art. This one can't go without something being said. The cover is amazing. Just looking at it will make you want to read the book. It is just absolutely elegant. The black background with the face coming out and the red and white letters make it very beautiful. Also in the back of the book, there is a section where the author gives more information on the history of this topic and some pictures to go with it.

Reading Daughters of the Dragon, you will learn a little about history, a time and place that most of us do not know about. The struggles that these women had to go through and carry with them for the rest of their lives. You will learn that courage and strength can over come anything and help you survive.

Daughters of a Dragon is a must read.

I was given this complementary book by the author and Bostick Communications for my honest review.
Posted by Unknown at 10:32 AM