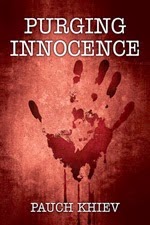 About the author:
Pauch Khiev was born in Moung Ruessei, Battambang, Cambodia, in the midst of the Khmer Rouge regime. She emigrated to the United States with her family in 1981. She studied film production in college, dreaming of making movies. She may someday make a film about her family. She is a self-taught singer, keyboardist, artist, and poet. A true "handy woman," she also loves working on DIY home-improvement projects and gardening. To her friends and family, she's known as a great chef at her "Hit or Miss Restaurant," her home kitchen.

About the book:
Survival Against Impossible Odds ... The Khmer Rouge: a name synonymous with unspeakable torture, oppression, and genocide. On April 17, 1975, they invaded Cambodia's capital, Phnom Penh, ruthlessly combing the city and murdering thousands on their hit lists as well as anyone who would not or could not leave. Whole families perished in this atrocious campaign. San Khiev, an ex-military fisherman, bravely helped his family and friends survive until they were transported to the countryside, where his pregnant wife had to watch him be taken away for "questioning," which meant he would never return. He was brought to a prison camp called Wat Thomayuth, a temple taken over by the Khmer Rouge, where they viciously tortured and murdered at least fifty prisoners a day. Rather than "giving names" of the innocent during brutal interrogations, San endured torments that most people would not have survived. He kept faith, even when there was nothing left to hope for. Day after day, for months, he miraculously escaped death. He is the only known survivor of this prison camp. Purging Innocence is the heart-rending, inspiring chronicle of a family moving from a successful life in a prosperous and thriving country, through the horror of the Khmer Rouge regime, one of history's most tragic and shameful events, to a new but challenging life abroad. Through these family stories, as told by San's sister Pauch, you will witness horror, despair, loyalty, courage-and, above all, the astonishing resilience of the human spirit.

My take:
I hate to say this, but I can't really think of much to say about this book. I was thinking it was going to be more or less about the family's struggles, but turned out to focus more on her brother. She did start out writing about her family, but went into what her brother went through and to me that is what the book focused more on. I think if it focused 100% on her brother, it would have made for a better book. His story is amazing and how he held it together and made it out, says even more. Some people may find her writing style fine, but it didn't work for me. I felt like it was too much of her telling me the story, as though I was sitting in the room with her and she was talking to me, versus her writing about it and me reading it in that fashion. The book also has maps, plans and pictures of Cambodia and of course her brother. It is a very easy read, so one could finish it in a day or two.

This complimentary book was given to me by Bostick Communications and the author for my honest review.
Posted by Unknown at 11:13 AM