The Treasure of Snake Island: A Captain No Beard Story, by Carole P. Roman 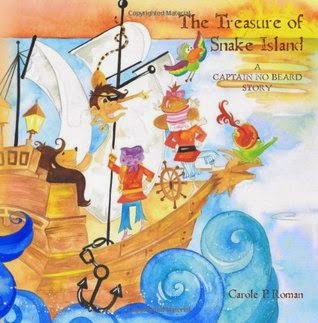 Title: The Treasure of Snake Island

About the Author: Award-winning author Carole P. Roman has produced another book for her "Captain No Beard" lineup. The first book in the series, "captain No Beard: An Imaginary Tale of a Pirate's Life" was named to Kirkus Reviews' Best of 2012, with a Star of Remarkable Merit, and was presented with a National Association of Book Entrepreneurs Pinnacle Award in 2013. Roman, a former teacher, is the mother of four and grandmother to many. She currently resides on Long Island with her husband.


About the book: This time the mateys of the Flying Dragon are threatened by a serious looking set of storm clouds. While the friends gobble their sandwiches, the storm comes to a head and everyone has to help bail out. Since they were forewarned, they are forearmed and are able to get through the storm in ship-shape. When the dust settles, the Captain leads his crew to Snake Island in search of buried treasure. As X marks the spot, the crew starts digging and starts flying until a solid thud stops the excavation. So, what's in the treasure box?


My take: Just like her other children books, this is a keeper. I really like her style of writing. She really knows how to keep children engaged in a book.

First of all, the characters in this story are cute. The use of animals and humans is a real attention grabber. They are very colourful and their expressions are priceless. When they are suppose to be exasperated, whether it be an animal or a person, their expressions go right a long with the story.

The story is written simplistically, but with enough action and adventure children will want to keep reading to find out what happens next. Not only is it just a story, it has a bit of learning in it also. Within this story, it speaks highly of books and why they are so important. I thought this was a good thing for children to read. Another thing children will learn from reading this story is how to overcome their fears.

This is a really cute series that I think everyone's child will benefit having amongst their other books.

This complementary book was given to me for my honest review.
Posted by Unknown at 11:21 PM