Stuck in the Doldrums: A Lesson in Sharing - A Captain No Beard Story, by Carole P. Roman 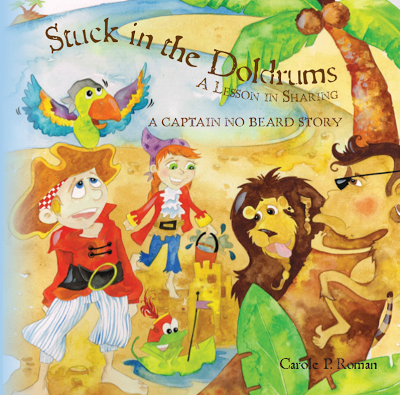 Title: Stuck in the Doldrums: A Lesson in Sharing


About the author:
Award winning author Carole P. Roman is a former teacher who now works in her family's business and publishes works in the Captain No Beard series. The first Captain No Beard- "An Imaginary Tale of a Pirate's Life" was named to the Kirkus Reviews' Best of 2012 and received the star of remarkable merit.

About the book:
When the wind stops blowing, Captain No Beard and his crew, including First Mate Hallie, Linus the Lion, Fribbet the Frog, Mongo the Monkey and Polly the Parrot, are stuck on a desert island. Maroon with nothing to do, they begin to play and enjoy themselves. However, Captain No Beard has other ideas, bossing his crew around and making playtime cheerless for everyone. Soon, Captain No Beard decides he has had enough and storms off. When his ship is attacked by a giant squid, he realizes he needs his crew more than ever. Captain No Beard and his crew show young readers that's it's important to cooperate and share your belongings. The crew teaches us that if you want to have friends, then you must be a friend too.

My take:
I really like this series. Any book that has a learning lesson for a child is good. This particular one is based on learning how to cooperate and not be bossy. This is a lesson that a lot of children need to learn (adults alike). The story shows what will happen if you try to boss your friends around and how to show forgiveness and help someone in need.

The author's writing style is very carefree and lively. Just enough dialogue mixed with the story keeps children interested. The wittiness of the interactions make the story very interesting. Also, the artwork is very cute. You can see the expressions come out in all the characters through the drawings and it helps you empathize with the just a little more. The book is very colorful, so it is appealing to the eyes.

If you haven't read one of these books in the series, you need to pick one up now. Not only will your child like it, so will you.

This complimentary book was given to me in exchange for my honest review.